True genius resides in the capacity for evaluation of uncertain, hazardous, and conflicting information. Winston Churchill 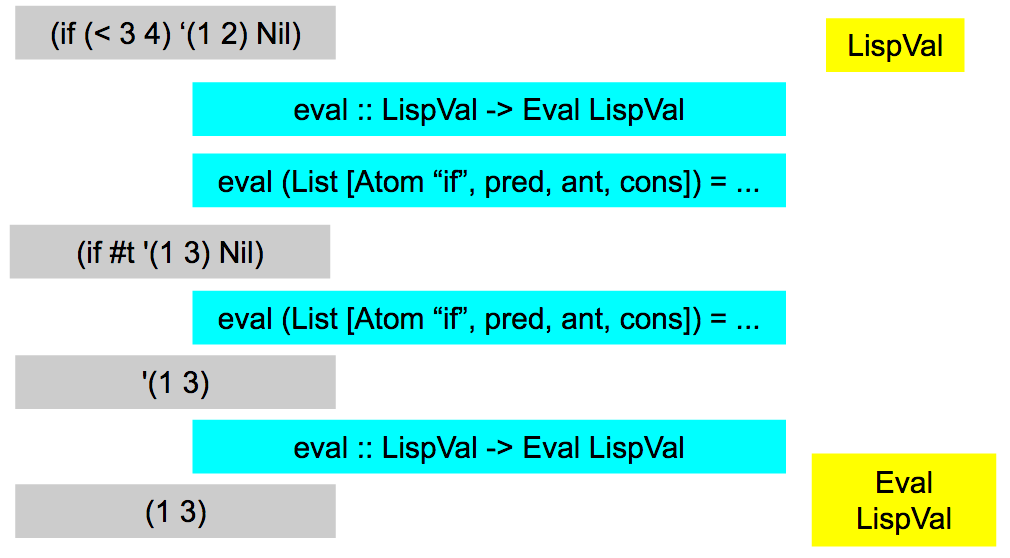 This code defines the data structure used to control evaluation. Specifically, it allows for lexical scoping, user input, and will contain the return LispVal for any valid expression. If your asking yourself how such a complex data structure is possible, then welcome to the world of monad transformers. These wonderful abstractions allow programmers to combine monads and automatically generate the correctly lifted functions. For instance, our Eval‘s IO would need its functions to be lifted, but since we derived MonadIO, this happens automatically during compilation.
This ’magic’ is made possible through {-# LANGUAGE GeneralizedNewtypeDeriving #-} pragma. The big addition we get here is liftIO, which lets us operate IO actions within Eval context: liftIO :: IO a -> m a. We will be discussing this more in Chapter 7 on input and output.

This is our primitive environment, which will be detailed in the next chapter on Prim.hs. Recall that we defined EnvCtx in LispVal.hs as:

Our environment is a collection of bindings between names and entities, referenced name. For now, we must only concern ourselves with the fact that the names in the environment comes from LispVal's Atom data constructor. This data structure is going to be the basis of our lexically scoped variable look up.

There is a lot of movement here (possibly dragons), and the functions above do the following things:
* evalFile is used from the main :: IO () loop to run a program file.
* readExprFile runs the parser on the program text to return a LispVal or ParseError.
* fileToEvalForm runs the parser, if an error occurs, it converts it into a LispException, PError and throws it, else, it evaluates it using evalBody.
* runASTinEnv executes the the evalBody :: LispVal -> Eval Body with the EnvCtx, essentially running our program by first unwrapping Eval with unEval (the data accessor to Eval), then using the runReaderT and runResourceT functions on the transformed monad.

Using our aptly named Eval structure, we will define the eval function within Eval.hs as follows:

Given our type signature, we can think back to our Scheme semantics, and recall we need to handle a few special cases:

These will be known as our “Special Forms”, different from functions defined in the primitive environment or standard library, as they are implemented via pattern matching on the argument (LispVal) of the eval function. All other Scheme functions will either be primitives or from the standard library, and have their argument evaluated before being passed into the function. Therefore, special forms will require non-standard evaluation of their arguments, sometimes having arguments not evaluated, or evaluated under special conditions. This difference is what determines what must be implemented as an eval pattern match, and what can be done elsewhere.

The eval function is the heart of our interpreter, and must be able to pattern match every possible valid syntax, as well as the special forms. This is a pretty tall order, so we are going to approach this by going through the eval function piece by piece along with the helper functions needed to run that code. It’s a little disjointed, but the simplest way to explain exactly how to implement the syntax and semantics of Scheme in Haskell. As always, to view it all together, see Eval.hs. As we go through the code you will see some throw, which are covered in the next chapter, for now, recognize that throw $ LispExceptionConstructor "message-1" returns Eval LispVal.

Quote returns an un-evaluated value, pretty basic, but it helps to start out simple!

For Number, String, Bool, and Nil, when we evaluate, we simply return the value. This is known as the autoquote facility, and makes it so we can pass these values into functions and evaluate them without consequence, or logic deferring evaluation of these types. For List, we have made the evaluation of an empty list go to Nil. This will be useful for functions that consume the input of a list conditional on the list having items left.

Write does not evaluate argument or arguments, and instead runs show on them before return that value in a String. For the second version, we are taking the two or more arguments passed to write and simply converting them into a List.

Now we’re talking! When we evaluate an Atom, we are doing variable lookup. getVar will do this lookup by getting the EnvCtx via ask, then running a Map lookup, returning the value if found, else throwing an exception.

Here we implement the familiar if special form. First, we evaluate the predicate by recursing on the eval function. Given that value, we pass it to a case statement, for True, then we evaluate the third S-Expression, and for false, the fourth. Thus, if only evaluates one of its third or fourth arguments, requiring it to be a special form.

The let special form takes two args, a list of pairs and an expression. The list of pairs consists of an atom in the odd place, and an S-Expression in the even place. For instance, (let (x 1 y 2)(+ x y)) . From the current environment, a new environment is created with these bindings added, and the expression is evaluation as a body-expression in that environment. This is possible with the local function, defined along with our monad transformer stack.

The begin special form is designed to accept two types of inputs: one for each of the pattern matched evals. In the first form, eval matches on List[Atom "begin", rest], where rest is then passed to evalBody. The second form, or expanded form, accepts List ((:) (Atom "begin") rest), where rest is type [LispVal]. rest is then moved into a LispVal via the List data constructor, and then passed onto evalBody. This allows us to either accept the arguments as a single list, or as individual arguments. Further, this prevents us from wrapping an extra List around single values, since we make sure there are at least two or more values in rest when we pass it to List, before subsequently passing to evalBody. There is one more pattern match, for define, but its real worth will only emerge after discussing evalBody.

evalBody allows us to use the define statement, and evaluate body-expressions. These body expressions are not only important to lambda and let, but absolutely essentially to the creation of a standard library. The standard library consists of Scheme files with many defines used to bind library functions to the environment. evalBody pattern matches on a list composed of either (a define expression, and one other expressions) or (a define expression, and two or more other expressions).
For the first definition of evalBody, we pattern match the define, insert the matched variable and value to the environment, then run the second expression, rest, in this modified environment using eval all within a local function. This is our base case.
In the case of the second expression, rest is not a single expression, but a list of expressions. We handle this by doing the same pattern match and environment update on define, but instead of calling eval we wrap rest in a List and recurse on evalBody. Thus, we can subsequently consume define statements.

The lambda special form gives our users the ability to create and define functions. Variables within those functions will be lexically scoped, which means they will always have the value they had when they were enclosed within the lambda. We will achieve lexically scoped variables by bringing a copy of the EnvCtx with us into the Lambda data constructor, Lambda IFunc EnvCtx. When we encounter the lambda special form in eval, we grab the environment, then return the data constructor for Lambda along an IFunc $ applyLambda expr params and the grabbed environment. Looking at applyLambda, what we are doing is partially applying the parameters of a function, to return a function that accepts arguments [LispVal], binds them to the atomic values in the parameters, then evaluates the expression passed into applyLambda as expr. Thus, we go from applyLambda :: LispVal -> [LispVal] -> [LispVal] -> Eval LispVal to applyLambda expr params :: [LispVal] -> Eval LispVal which is the correct type for the type IFunc. Thus, we can achieve lexical scoping using the ReaderT monad.

The final form is application, we’ve made it! If you are familiar with lambda calculus, this is one of the three forms, along with variables and lambdas. The way we perform application is to pattern match on the head, then tail of List. Next, we evaluate both of these values. We run case on funVar, the head of the list, which should be either a Fun (internal function), or Lambda, a user-defined or library function. If internal, we simply extract the function of type [LispVal] -> Eval LispVal and apply the arguments. For Lambda, we must evaluate the function within the environment provided by the Lambda to ensure lexical scope is maintained.

That was a lot! If LispVal defines the syntax, then Eval defines the semantics. Now is a good time to read Eval.hs and see it work all together, since that’s all that defines the mechanism of evaluation. Our implementation is made possible by monad transformers, specifically the integration of ReaderT, which we use to implement lexical scope. Without monads, we would have to pass in an extra argument to every eval, as well as some of the helper functions, not to mention the complication of handling the other functionality of monads composed within our Eval. For a simple interpreter, its hard to do much better. For a faster interpreter, we would need to compile.
Anyway, we have the the basis for our language and could start work on proving theoretical properties. We won’t do this, and instead move towards gaining the next thing needed to be practical, a collection of basic operations to manipulate data. But before moving on to primitives, we quickly cover errors, which show up all over eval function. If you just can’t wait to define some functions and get the REPL up and running, the basic message is, when bad things happen, throw an error that gives the user enough information to fix the problem.

Implement a delay function as a special form that returns its argument as the body of a lambda expression that accepts no arguments. (delay x) => (lambda () x)
You careful read the R5RS standard and are upset to realize we have implemented let incorrectly. Instead of (let (x 1 y 2) (+ x y)) the standard calls for (let ((x 1) (y 2)) (+ x y)). Make this change.
GADTs are sometimes used to implement LispVal. How would evaluation change?
Implement one of (case, letrec, let*, sequence, do, loop) as a special form. Check the R5RS standard for more information.
[Bonus] Find a unique difference in the implementation of special forms between this project and R5RS, implement the special form, then submit a new PR.

Danger Will Robinson, on to Errors!